Chlordioxid is extremely effective for disinfection. Even very low dilutions have a strong disinfectant effect on microorganisms - both on viruses, bacteria, moulds and algae.

ProtoxBiox is characterized by a very rapid reaction time. The disinfection is effective within seconds to a few minutes.

Only for professional users

The product is sold only to professionals who have received the necessary training from Protox.

ProtoxBiox is fast and cheap to use

The use of ProtoxBiox is easy, quick and inexpensive for mould cleaning, compared to the commonly used mechanical methods.

Large concrete surfaces are particularly suitable for Biox treatment, as the decontamination will ensure a thorough disinfection with very limited physical effort and a contact time of only approx. 60 seconds.

Approved for use in Food industries

ProtoxBiox is approved by the Food Agency in Denmark for use as a disinfectant in connection with disinfection of premises, furniture and equipment that come into contact with food, in milk-supplying herds and on fishing vessels.

The environment is the real winner

No chemical residues are left in the indoor or outdoor environment. This is a significant advantage of ProtoxBiox compared to almost all other disinfectants.

The chlorine dioxide that is not used for the disinfection will evaporate to the air and be broken down to oxygen and chloride ions of the UV rays of light.

In connection with the treatment there will be an odour of chlorine dioxide (as in a swimming pool). A few hours after treatment, the smell will have disappeared and only a very weak solution of ordinary kitchen salt will be left behind. 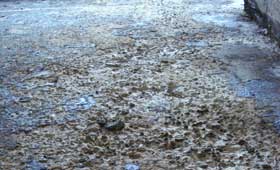 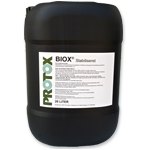 You have no folders.

Simply create a folder by clicking the above button. You can also create a collection-gallery relation.